The ink was barely dry on the Family Smoking Prevention and Tobacco Control Act (FSPTCA) of 2009 when several large tobacco manufacturers filed suit against the FDA in a federal district court in Western Kentucky. Plaintiffs challenged FSPTCA provisions requiring that tobacco companies place health warnings, including color graphic images, on the top 50 percent of cigarette packages and on 20 percent of all cigarette advertisements. (In this same lawsuit Plaintiffs challenged several provisions of the FSPTCA that restrict marketing to reduce product appeal; we discuss these other claims here.) Plaintiff companies claimed, in part, the required health warnings violated First Amendment speech protections. They argued the mandated size of the warnings impermissibly restricted opportunity for manufacturer messaging, and mandated graphic and textual warnings impermissibly compelled manufacturers to deliver the government’s message. After a district court upheld the statute’s health warning requirement, the case was elevated to and affirmed by the Sixth Circuit.

The Sixth Circuit concluded the Act’s mandate that tobacco packaging and advertising include color graphic and non-graphic warnings along with new textual warnings, would satisfy the First Amendment so long as the warning requirement was reasonably related to the a legitimate government interest and not unduly burdensome. Plaintiffs argued against this “reasonableness” standard on the basis that health warnings are subjective and highly controversial, rather than factual disclosures, and therefore must directly and materially advance a significant government interest and be no more extensive than necessary to serve that interest.

While adhering to its conclusion that the Act need only meet the “reasonableness” standard, the court simultaneously defended the health warnings under the more stringent standard. Namely, the court found: 1) the warning requirement addressed an important government interest (preventing smoking and consumer deception regarding the risk of suffering from tobacco related illness); and 2) the warning requirement directly advanced this government interest (ample scientific evidence supports large graphic warnings as a tool to reduce tobacco use); while 3) being no more extensive than necessary to serve that interest (the warning requirements are tightly focused on being seen by consumers and have particular impact on youth; and they are not unduly burdensome, but rather leave ample space available on packaging and advertisements for manufacturer messaging).

While the district and appellate court decisions were supportive of the concept of FSPTCA’s graphic warning mandate, the courts in this case did not address FDA’s specific warnings as applied, because the agency had not yet issued the warnings.

Once the FDA finally chose the specific warning labels, which were scheduled to go into effect in September of 2012, the tobacco industry lost no time in challenging them. Echoing arguments in the Discount Lottery case, described above, tobacco product manufacturers argued the graphic warnings impermissibly violated First Amendment speech protections. R.J. Reynolds v. FDA was filed in Washington, D.C., where the district court struck down the images, siding with the Plaintiff tobacco companies in its finding that the warnings violated First Amendment protections against compelled government speech. The case was appealed to the U.S. Court of Appeals for the District of Columbia, which held 2-1 that the district court erred in its review, but nevertheless ruled the required health warnings violated tobacco companies’ First Amendment speech protections. The government lost its petition for a panel rehearing en banc, and decided not to seek further review of the court’s ruling. 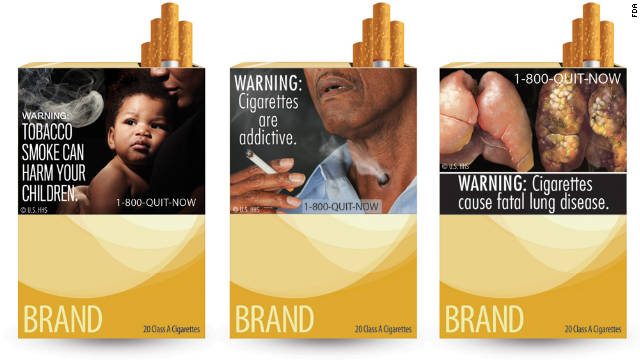 The appellate court concluded that FDA’s rule requiring graphic and larger textual health warnings avoided First Amendment violation if it directly advanced a substantial government interest asserted by the government, and was no more extensive than necessary to serve that interest. The court proceeded to grant the agency a substantial interest in reducing smoking rates, but held that the FDA has not provided a “shred of evidence” showing that the graphic warnings will “directly advance” this interest. Rather, in determining that measureable increases in consumer attention to smoking dangers and intentions to quit resulting from the health warnings would translate to fewer people smoking, the agency relied on “mere speculation,” according to the court. The court reasoned that FDA must show evidence that the graphic warnings would actually reduce smoking rates (not merely educate consumers). It dismissed existing studies from outside the U.S. demonstrating the effectiveness of graphic health warnings in making smokers quit on the basis that the graphic warnings were implemented at the same time as other tobacco controls. That is, the court concluded, the FDA failed to show that the graphic warning rule would directly advance their interest in reducing smoking rates. The proposed warnings therefore violated First Amendment protections against compelled government speech.

In 2013, the FDA dropped continued appeals, instead intending to undertake further rulemaking and propose a new set of graphic warnings, which brings us to the 2016 challenge by public health advocates seeking to compel agency action on this issue, summarized below.

On October 4, 2016, a group of eight public health advocacy organizations and several physicians filed suit against the U.S. Food & Drug Administration (FDA) to compel the agency to carry out its obligation under the Family Smoking Prevention and Tobacco Control Act (FSPTCA) to require cigarette packages and advertisements to bear graphic health warnings. The complaint contended that despite more than four years passing since the agency’s proposed graphic warning rule was vacated, the FDA had failed to begin rulemaking proceedings for new graphic warnings.

The complaint alleged that promulgating these rules is nondiscretionary—in other words, the FDA cannot decide to forego implementing a rule requiring graphic health warnings on packages of tobacco products. The plaintiffs further asserted that there is extensive scientific evidence supporting the positive impact of graphic health warnings on public health (indeed, Plaintiffs said such evidence existed to support the agency’s original rules in 2011). Thus, Plaintiffs sought a declaration that FDA “unlawfully withheld” or “unreasonably delayed” promulgating the final rule and requested the court compel the FDA to begin expedited rulemaking procedures to implement the graphic warnings requirement by the FSPTCA.

Plaintiffs maintained that as a consequence of the agency’s failure to satisfy the graphic warning mandate during the four years alone, more than 3 million Americans, most of them minors, began to smoke on a regular basis and half of them will die prematurely as a result. During this same time period, plaintiffs asserted, 2 million people have died of tobacco-related diseases.

The court agreed, and on September 5, 2018 ruled in favor of plaintiffs. Calling this an “extraordinary delay,” the court noted that records show gaps of time in which little or no work on revising the graphic warnings occurred at the agency. The court concluded that FDA had been illegally avoiding its “mandatory duty,” and ordered the agency to provide an expedited schedule to comply with FSPTCA’s mandate to implement a rule requiring graphic health warnings on packages of tobacco products.

One month later, the FDA filed its expedited schedule reflecting anticipated adoption of new labels in May of 2021. Plaintiffs were not satisfied with FDA’s new proposed timeline, and immediately filed a response urging the court to reject this timeline and issue an order requiring a final rule be submitted for publication in the Federal Register by January 31, 2020. In a ruling issued on March 5, 2019, the District Court rejected FDA’s timeline, instead ordering FDA to issue a final rule by March 15, 2020. The judge reasoned that FDA’s timeline went past Congress’ two-year window to enact a new rule and would further delay a process that that began more than eight years ago. While the FDA appealed the court order on May 20, 2019, the agency also filed proposed health warnings and graphics on August 15, 2019. The agency published a final rule on March 17, 2020. 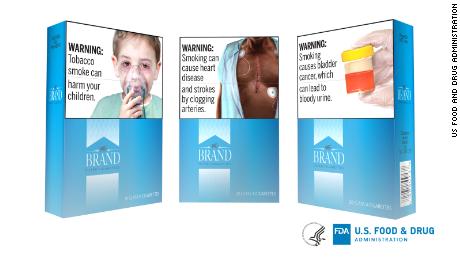 R.J. Reynolds’ parent company (RAI) and other tobacco product companies sued the FDA over the agency’s second round of proposed graphic health warnings. The complaint alleges in part that the graphic warnings are designed to send an anti-tobacco message, including through provoking a negative emotional response to the product use. By requiring products and advertisements to carry these messages, the companies argue, FDA is impermissibly compelling speech in violation of the First Amendment. Moreover, the companies assert that any graphic warnings the agency proposes will be likewise impermissible and therefore the Tobacco Control’s Act’s requirement for FDA to issue a graphic health warnings rule violates the First Amendment. The companies contend that in determining the constitutionality of the graphic warnings, the court must apply “strict scrutiny,” the most rigid level of judicial review.

The companies claim other legal defects to the proposed rule, including that the rule is arbitrary and capricious, because FDA failed to undertake an appropriate cost-benefit analysis; that the FDA provided both insufficient notice of the rule and an insufficient period for public comment on the rule; that the proposed rule violates the Tobacco Control Act by changing the language of the textual warning and the number of warnings; and the Tobacco Control Act would be further violated by the FDA requiring companies to implement the new textual warnings prior to legal resolution of a graphic warnings rule. We will update this page as the new case progresses. A retail association's attempt to exploit the pandemic to delay enforcement of Massachusetts' flavored tobacco law is rejected by @MassGovernor--the lifesaving measure will take effect next week as planned.
https://www.wbur.org/commonhealth/2020/05/27/flavored-tobacco-ban-baker

Nicotine products marketed as "tobacco-free" have the potential to confuse consumers and regulators, and undermine state and local tobacco controls.
https://cstoredecisions.com/2020/05/19/smokeless-tobacco-alternatives/

Starting today, menthol cigarettes are prohibited in the European Union and United Kingdom. It's long past time for @FDATobacco to take action--the evidence is clear that menthol eases smoking initiation and prolongs addiction. https://www.standard.co.uk/lifestyle/health/menthol-cigarettes-ban-uk-date-a4426191.html